Documentation Pricing Blogs Be a Partner Changelog
Sign up

Nestle Myanmar wanted fourfold growth by 2020: Find out how MyAlice helped them

MyAlice chatbot and CRM had a tremendous impact on the customer support for this campaign. They received three hundred thousand unique entries from different parts of Myanmar.

Nestle is one of the fastest growing food production companies serving over centuries. This multi-brand company owns over 2000 different brands ranging from global icons to local favorites, and are present in 186 countries worldwide.

They set off to operate in Myanmar in 2014. Nestle Myanmar put their primary focus on adjusting the food according to the local’s taste and designed especially for Myanmar people.

They sell different ranges of food and beverage products for all stages of life, starting from baby food, dairy products, to coffee.

In 2020, Nestle wanted to run a three  months long campaign with the finale being the ultimate lucky draw.

The goal behind this campaign was to — market how their products can enhance the health quality of Myanmar people and increase customer retention as well amid the outbreak of Covid-19.

Customers had the chance to win a huge number of cash prizes every week if they buy any Nestle products.

Facebook is the center of their target social channels to reach potential customers as the majority of Myanmar people are active on Facebook.  So, Nestle decided to run this major lucky draw campaign on their Facebook page.

Their target customers could easily participate through messenger and they chose lucky draw winners live on the Facebook Page.

Nestle collaborated with nexlabs, in the meantime  received a massive response on social media for ‘Let’s try our luck with Nestle’s 500 Lakhs!’ campaign.

Participants were required to submit a valid participation code and enter those details.  2 months in on conducting the campaign, Nestle announced lucky winners every week for eight weeks straight.

The winners were given desirable cash prizes and the prize amount was increasing substantially every week which also added up to the hype of this campaign.

nexlabs used Facebook messenger as a media for the audience to take part in this campaign and send in codes found inside the Nestle products.

The campaign was well received by the audience as the hype all over the country encouraged more people to participate in it. Because the chance of winning is quite high.  As a result, Nestle sold more products than ever.

The real challenge appeared when the number of participants increased substantially. With more than 6 million contributors, it was challenging the abilities of customer support to sort this massive number manually and distribute the cash prize among winners.

Businesses usually consider this as a good problem, but the support team didn’t feel that. Because they were losing tack pretty fast, customer management efficiency was hitting the lowest.

When Nestle was hunting for the best solution, they witnessed how MyAlice is working to improve customer service management with the help of AI based chatbot. And they found MyAlice promising in every sphere.

They integrated Alice chatbot and omnichannel CRM in their Facebook page for the campaign which eased most of the stress.

Alice team worked on creating a specialized chatbot that’s main job is to compare the submitted code to the dataset and collect the data that users give accordingly.

Alice chatbot and CRM had a tremendous impact on the customer support for this campaign. They received three hundred thousand unique entries from different parts of Myanmar.

The campaign turned out to be a huge success with at least 200K people tuning in to the Live ‘Lucky Draw Winner’ stream every week to find out whether or not they are taking money home.

Phyoo Ko Ko, the brand manager of Nestle Myanmar put down their experience working with us.

“We have worked with Misfit tech during an online promo campaign of Nestle.The team has a strong technical skill as well as a timely approach on matters when things go unexpected ways. We had loads of editions and changes during our campaign and the team helps to offer a good service under short notice. Appreciate the efforts to help execute the nationwide campaign of Nestle Myanmar.”

MyAlice chatbot and CRM had a tremendous impact on the customer support for this campaign. They received three hundred thousand unique entries from different parts of Myanmar.

Within a few days, MyAlice helped Knorr see quantifiable performance metrics. The user retention boosted up after integrating MyAlice in their social media platforms. Knorr Bangladesh saw an increase in the user retention rate of 23.8%!

With the help of MyAlice, Maybelline Myanmar gained detailed insights into their sales and customers, backed up by quantifiable performance metrics. Within a year after the chatbot was deployed, the company received approximately 4,800 orders via Messenger only.

Join hundreds of businesses just like you
who’ve added MyAlice

Book a demo with Shuvo

All your customer conversations and e-commerce orders under one dashboard 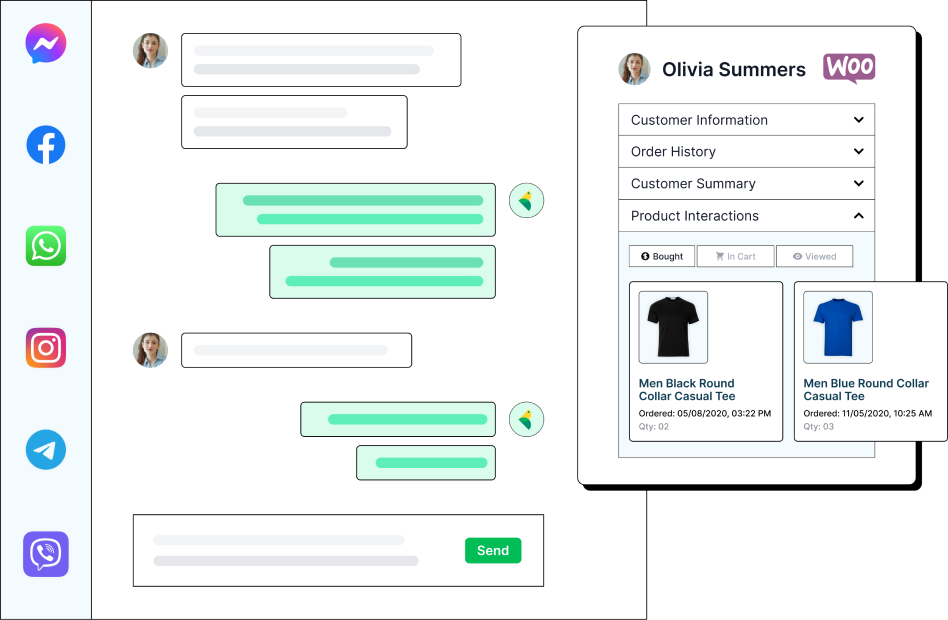